Representing STELLA at the Erasmus Days 2018

The French and Italien team participated in the Erasmus Days 2018, representing the STELLA project with a documentary film by and about people with disabilities as well as offering some communicative group exercises for all to participate in on the 12th October. 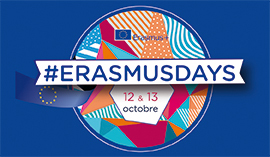 The 'European' table at Les 3 Fontaines

A total of around 50 people attended the Erasmus Days event hosted by the STELLA Organizational Skills team, 25 questionaires were completed, mainly by clients who work at ESAT (Sheltered Living) and the results were satisfactory, as can be seen in the results below.

There was also a lot of positive feedback from the staff members attending the event as well as from other guests who thought the STELLA team was very involved in the project and showed responsibility and initiative.

The debuty mayor, Ms Cobbaert, expressed her desire to work together with the STELLA project going forward, maybe at the multiplyer event in April 2018. Cobbaert is sensitive to the needs and wishes of people with disabilities and will ensure a press release will be published in the JDA (municipality news) in order to lend public validation the work of people with disabilities.

Ms Houari, from the Regional Council Hauts de France (Direction Europe) has offered to accompany us if we apply for the Erasmus project.

The STELLA team, especially the clients were very proud of their work and the results. It was a particular challenge as it was composed of two parts: organizing the event and animating the presentation and leading the workshops during the event. 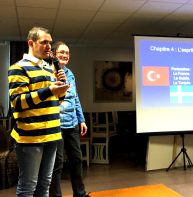 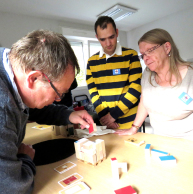 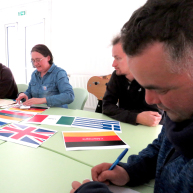 Feedback from participants before, during and after the event

The event took place during working hours in the Home Les 3 Fontaines in Armentiéres, in the north of France bordering on Belgium.

Based on our previous experience organizing a birthday party, we knew how to list the tasks and review the timeline of the event. 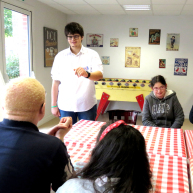 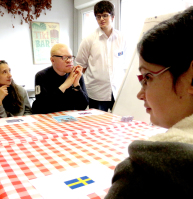 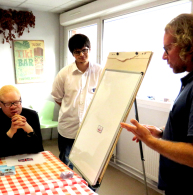 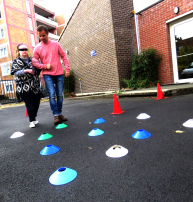 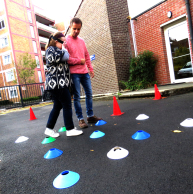 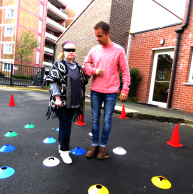 Making publicity for the big event shortly before. 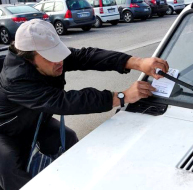 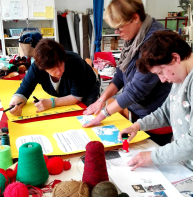 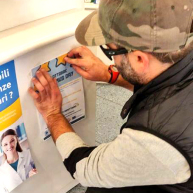 The community of modigliana has participated in a large and festive event. Thank you all.
It was nice to see children, young people, adults and grandparents together. It was nice to listen to Italian and romagna dialect next to Portuguese, English, polish, French. It was nice to be surrounded by the colors of balloons, pom poms and those of people's faces... all united in diversity, just as the motto of our Europe reads.

Thanks to the mayor and municipal administration who gave us spaces, to the alpine choir that gave us a beautiful hymn to joy, to the twinning committee and to all modiglianesi who participated. 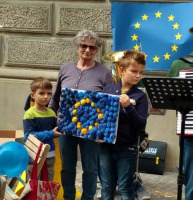 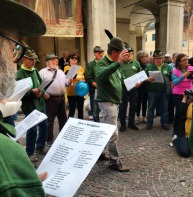 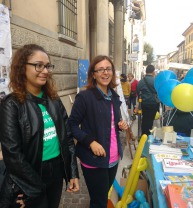 Preparing for Erasmus Days in France

Upon receiving a positive reply from Esat (sheltered workshops) to stage an event within the scope of the ERASMUS Days 2018, the team from Organizational Skills has been making preparations.

We spent most of our time visiting the venue, Home Les 3 Fontaines, in order to ddecide on location where our event will take place on the 12th of October. Before to go there, among the main questions, the group has to know how many people can be invited there.

After a warm welcome from the team at Les 3 Fontaines we were allowed access to the rooms available as an event venue. Alongside a big living room area with plenty of seating, a bar area referred to as the "Bistrot" and another small room, it's also possible to use the outdoor area next to the entrance or the area adjacent to the living room.

Visiting the actual venue in order to start organizing the event created awareness and evoked a decision-making process in the group.

After debating practicalities such as room size, seating availability, possibilities for rearranging furniture and interior decoration as well as technical aspects such as electrical plug locations, the group came to the following conclusions:

The participants at Kara Bobowski held a workshop to prepare for the ERASMUS DAYS event.

A look into the recent activity of our Italian partner Kara Bobowski - They are developing their organizational and technical skills through organizing the Erasmus Days event on 12 and 13 October and learning about the nature of European citizenship. 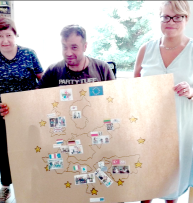 To invetsigate the European sentiment and thoughts about the EU of the PWDs as well as their view of the organizational work for the Erasmus Days. In so doing, strenghthen their motivation and ideas for this event. 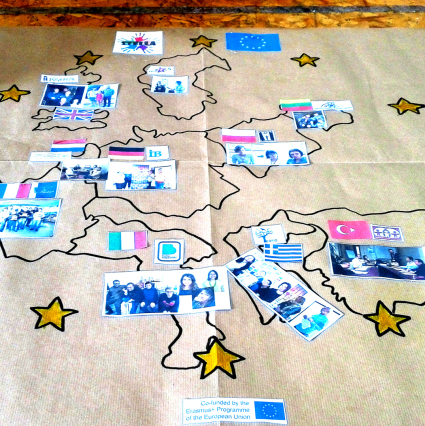 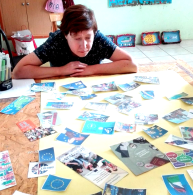 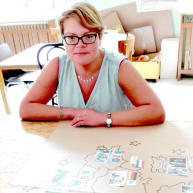 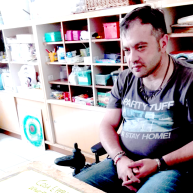 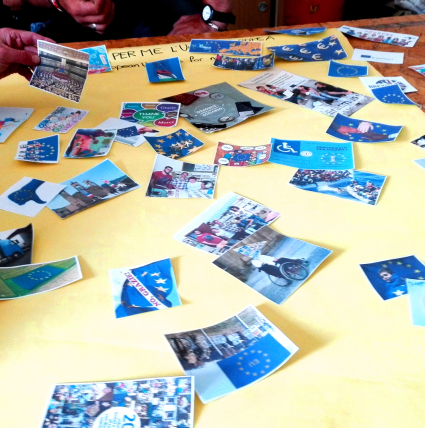 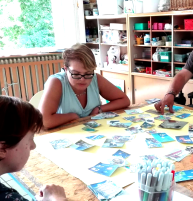 To test the sentiments and thoughts of the PWDs towards the European Union and to give our STELLA partners a face.

We chose a poster with the question “If I say European Union, what do you think?”.

We went through the images together, trying to explain what they represented. Thereafter the PWDs chose four images and pictures they personally associated with the notion EU.

They mostly chose positive images and related them to their direct experiences, like the photos representing STELLA or the European volunteers (also with disabilities). They recognized them from the event hosted by Kara Bobowski. Only Marika chose a photo representing the Euro currency, saying that it was better when we had Lira because she could buy more things with 15 Lira than she can now, with 15 Euros.

We tried, however, to think about the positive aspects of having a single currency.

After associating images, we tried to find some words associated to European Union.

Organizing our STELLA event for the Erasmus Days : Saturday, 13 October 2018

Before facing the topic of the day, we did a brainstorming exercise on the STELLA project.

Joana, our Portuguese volunteer prepared a nice drawing representing the milestones of the project as a path. For each milestone (meetings in Germany and in Athens, for example) as well as for the intermediate stage (the organization of our first event), we created a small photo album.

STELLA EVENT:
In our previous event on 12th July, we already discussed to organize our STELLA event for the Erasmus Days. Today, we went a bit more on details:

It was not easy deciding on the exact location of our event: we discussed some ideas from the PWDs and weighed up the pros and cons of each one: in the end, we decided to organize our Erasmus event for Saturday, October 13th, in the morning, with the location along the street, in front of the municipality, as the city centre is closed to cars because of the weekly market. This way we are more visible and easier to come into to contact with more people. How to proceed in case of bad weather, will be discussed at the next meeting, the choices would be performing the event under the open gallery of the municipality or postponing it to a later date.

The next thing to decide was the activity specific to our sheltered centre “La Coccinella”: we already had an idea in mind (pompoms) but we did not reveal this as we wanted ideas from PWDs. As input for ideas, we informed them that it had to be something related to their work (as we are also on the Chapter about Technical skills) as well as to Europe. We thought again together about some symbols and colors associated with Europe, at which point Marika proposed to do a workshop in which they teach to people (adults and children) how to make blue and yellow pompoms.

Joana further proposed mounting the pompoms on a rectangular piece of wood/paper presented on a painting easel: once a person has finished making their pompoms, they can attach them to the wood or paper, transforming it into a European flag, composed by the pompoms. (left shoes with pompoms)

We also decided to prepare some pompoms before the event, as a gift to passers-by.

We concluded by remembering that the STELLA project is financed by Erasmus+ so we decided to prepare some posters for the event, representing the project with photos and key words related to STELLA.