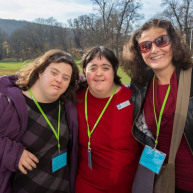 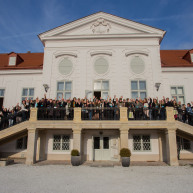 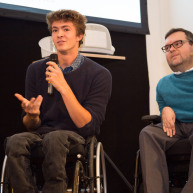 After 24 month project duration a congress in Vienna was realised with the target of uniting all partners in the project ELLA and to state an intermediate result of the work accomplished so far. This included the reports about the working packages and the corresponding deliveries as well as the presentation of the cooperation among the partners in each working package and the inclusion of the people with disabilities.

Another target of the congress was the presentation of these results to a selected public. Vienna is one of the most significant official residences of international organisations, e. g. the third office of the secretariat of United Nations and the agency of the European Union for basic law and the democracy centre.

Representatives of this and other institutions and political representations and adult education centres were invited to the congress to inform them about the educational situation of people with disabilities in the single partner countries. Presentations, reports and workshops and a panel discussion with participants with and without disabilities promoted the exchange and information flow and fixed the issue of inclusive adult education in society and politics. The congress was organised for an audience of about 150 participants.

The time table of the congress was as follows:

1. day: arrival and presentation of intermediate results among the partner countries
2. day: Public part with presentations, reports, panel discussion, workshops and press conference
3. day: Summary of second day, singular meetings of the participants of the working packages, perspective and departure

The German project leading team structured the agenda regarding content and time and prepared the workshops. External moderators were included in the panel discussion and in the workshop conception. The project leading team asked the partners for the results of the presentations, reports and workshops and summarised them in a manual, which was be multiplied and distributed to a larger group of people.

The Austrian partner organisation ÖJAB had a special role in the effective organisation and realisation of the congress at place regarding accommodation, catering, participant transfer and equipment of conference rooms. Furthermore ÖJAB organised the press conference by inviting press representatives of all media and previously informed them about the project.

The French partner „Caravane 2000” made a short film about the congress which was be published on the websites of ELLA and the partner countries after the congress.
All partner organisations used press release, press publications as well as manual and film in their networks to inform about the project.

The congress signified an important milestone in the frame of the whole project regarding the status quo of the working packages and the situation in the partner countries. The final summary brought the same level of knowledge to all project participants and gave a perspective on the upcoming activities.